Obedience - Part 5: The House On The Rock

Everyone then who hears these words of mine and does them

will be like a wise man who built his house on the rock.

And the rain fell, and the floods came, and the winds blew and beat on that house, but it did not fall,

because it had been founded on the rock.

will be like a foolish man who built his house on the sand.

And the rain fell, and the floods came, and the winds blew and beat against that house, and it fell, and great was the fall of it.

And when Jesus finished these sayings,

the crowds were astonished at his teaching, for he was teaching them as one who had authority,

and not as their scribes.

We as human beings are all so very much the same - and yet so very different.

But, according to Jesus, different not necessarily in the ways that we think or believe -

but in the ways that we behave and act.

Most of us, at some time, in some place, in some way, hear or have the opportunity to hear Jesus’ words.

We all then build houses, either literally or spiritually -

houses we live in bodily, or the houses of our lives that we live in metaphorically.

For all of us, one day the rains and the floods will come, and the winds will blow and beat on our houses -

again either literally or spiritually.

Our days are simply not always sunny and calm -

that fall and blow and beat down upon our houses and lives,

seeking to destroy them completely.

But here then, the similarities end and the differences begin.

Because there are those who, from the start, are foolish - and others that are wise.

They are the foolish ones.

Because they hear how to build wisely, but choose to build foolishly.

Although they have heard that they shouldn’t, they build the houses of their lives on sand, unsteady and shifting sand.

And when the storms come, which they will and do,

the houses of their lives fall, and fall greatly and terribly.

Because, of course, how could they remain standing firmly on something as moveable as sand?

They are the wise ones.

Because they too hear how to build wisely, and they choose to do so.

They build the houses of their lives on solid and sturdy rock.

And when the storms come to them, which they also will and do,

the houses of their lives do not fall at all.

Surely they get wet and beaten down upon, but they do not fall -

because they were founded on steadfast and trustworthy rock.

So where have you built the house of YOUR life?

Or wisely, on solid rock?

After hearing the astonishing and authoritative words of Jesus, as did the people in His days here on earth, what will YOU do?

The decision is yours.

But the end result will be yours as well. 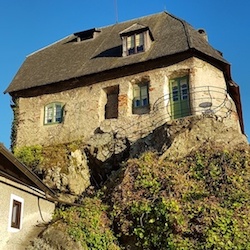 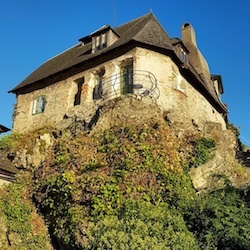 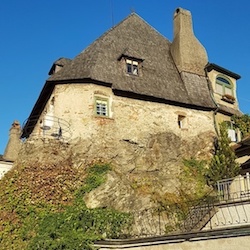 THE HOUSE ON THE ROCK, in the city of Melk in Austria - originally built in the 1400s