“Our Blessed Lord had called His Body the Temple because the fullness of Divinity dwelt in it. The earthy temple of Jerusalem was only a symbol of Himself. In that temple of Stone there were three great divisions. Beyond the court of entrance was a place that was called “holy”, and beyond it a place more secret still, which was called “the Holy of Holies”. The court was separated from the holy place by a veil, and a great veil also divided the holy place from the Holy of Holies.

The very moment that Our Blessed Lord willed His death: “All at once, the veil of the temple was torn this way and that from the top to the bottom.” (Matthew 27:51)

The very fact that it was torn from top to bottom was to indicate that it was not done by the hand of man, but by the miraculous Hand of God Himself, Who had ordained that, as long as the Old Law should endure, the veil should hang before the Holy of Holies. Now He decreed that it should be torn asunder at His death. That which of old was sacred now remained opened and manifest before their eyes, uncovered like any common and ordinary thing, while before them on Calvary, as a soldier pierced His heart, was revealed the new Holy of Holies containing the ark of the New Testament and the treasures of God. The death of Christ was the deconsecration of the earthly temple, for He would raise up the new Temple in three days. Only one man, once a year, could enter into that old Holy of Holies; now that the veil was rent which separated holiness from the people, and separated the Jew from the Gentile, both would have access to the new Temple, Christ the Lord.

There is an intrinsic connection between the soldier piercing the Heart of Christ on the Cross, which drew forth Blood and water, and the rending of the veil of the temple. Two veils were rent: one, the purple veil of the temple which did away with the Old Law; the other, the veil of His Flesh which opened the Holy of Holies of Divine love tabernacle among us. In both instances, what was holy was made manifest; one, the Holy of Holies, which had been only a figure; the other, the true Holy of Holies, His Sacred heart, which opened to the guilty, access to God. The veil in the ancient temple signified that heaven was closed to all until the High Priest sent by the Father would rend the veil and open its gates to all. St. Paul told how the high priest of old, only once a year, and then not without an offering of blood for his own faults and those of the people, was permitted to enter the Holy of Holies. The Epistle to the Hebrews explains this mystery:

“The Holy Spirit meant us to see that no way of access to the true sanctuary lay open to us, as long as the former Tabernacle maintained its standing… Meanwhile, Christ has taken His place as our High Priest…, a more complete tabernacle, which human hands never fashioned; it does not belong to this order of creation at all. It is His own Blood, not the blood of goats and calves, that has enable Him to enter, once for all, into the sanctuary; the ransom He has won lasts forever.” (Hebrews 9)

Then, comparing the veil of the flesh and the veil of the temple, the Epistle adds: “He can enter the sanctuary with confidence through the Blood of Christ. He has opened up for us a new, a living approach, by way of the veil, I mean, His mortality.”(Hebrews 10:19-20)

A thousand years before, David, looking forward to the Messias, wrote: “No sacrifice, no offering was thy demand; enough that thou hast given me an ear ready to listen. Thou has not found any pleasure in burnt-sacrifices, in sacrifices for sin. See then, I said, I am coming to fulfill what is written of Me, where the book lies unrolled; to do Thy will, O my God, is all my desire, to carry out that law of Thine which is written in My heart.” (Psalm 40:6-8)

As the Psalmist looked back on the sacrifices of slain beasts, the burnt offerings to attain Divine favor, and the sin offerings to make reparation for wrong, his mind dwelt upon them only to cast them aside. For he well knew that these slaughtered bulls, goats, and sheep could not really affect man’s relationship with God. He saw in a future day God having His Divinity enshrined in a human Body as in a temple, and coming with only one purpose, namely, to surrender His life in accordance with the Divine will. David proclaimed that the Divine Incarnation would be the perfection of the sacrifices and the priesthood of the Jewish Law. Now the figure was fulfilled as the spotless Lamb of God offered Himself to His Heavenly Father. The old promise made to Israel in Egypt still held good and could be claimed, in a higher sense, by all who invoked the Blood poured out on the Cross: “At sight of the blood, I will pass you by, and there shall be no scourge of calamity for you when I smite the land of Egypt.” (Exodus 12:13)

Levi’s House of priesthood was now dismissed. The Order of Melchisedech became the law in the House of Levi. The “no admittance” sign before the Holy of Holies of the earthly temple was removed. When Christ came into the world to be the fulfillment of the order of Melchisedech, the House of Levi denied Him welcome… But, as the veil of the temple was torn, the priesthood of Melchisedech came into its own, and with it the true Holy of Holies, the true Ark of the New Covenant, the true Bread of Life – the Christ, the Son of the Living God.” 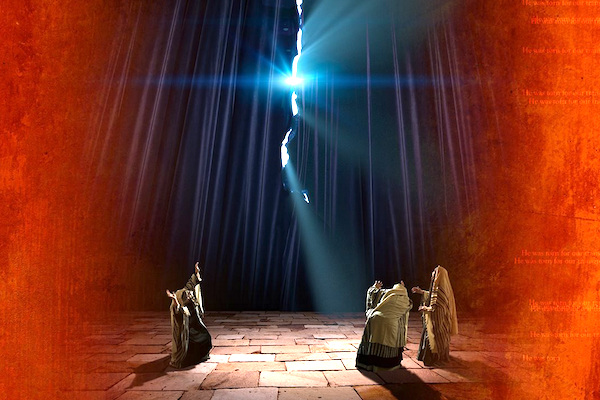 One of the most beautiful spots on the Island of San Andrés is the southern tip.