“The Body of the Savior hung limp upon the Cross…

The services of two rich men:

One was Nicodemus, the secret disciple who made his appearances at night. Nicodemus was a doctor of the law and was looked upon as a master in Israel. From the very beginning, he knew that Our Savior was a teacher come from heaven, yet in order to preserve his authority and not expose himself to the hatred of his countrymen he always showed up in darkness.

The other, Joseph of Arimathea, gave Him the new tomb. The latter had gone to Pilate to ask him for the Body of Our Lord, and Pilate committed It to him. The wealth, rank, and position of these men was noteworthy.

These two men with a few devout followers prepared to take Our Lord down, to unfasten the nails and take off the crown of thorns. Bending over the figure on which the Blood was hardened, only the eyes of faith could see the marks of royalty there. But with the love that broke through all bounds of calculation, these two latecomers and hidden disciples tried to show their loyalty.

Nicodemus and Joseph anointed the Body with a hundred pounds of myrrh and spices and wound it about with pure linen. The elaborate embalming rather suggested that these secret disciples, as the Apostles themselves, were not expecting the Resurrection. Physically, they were mindful of Him; spiritually, they knew not yet Who He was. Their concern about His burial was a token of their love for Him, not of their faith in Him as the Resurrection and Life.

“In the same quarter where He was crucified there was a garden.” (John 19:41)

The word “garden” hinted at Eden and the fall of man; as it also suggested through its flowers in the springtime, the Resurrection from the dead. In that garden was the tomb in which “no man had ever been buried” (John 19:41) Born of a virgin womb, He was buried in a virgin tomb, and as Crashaw said: “And a Joseph did betroth them both.” Nothing seems more repelling than to have a Crucifixion in a garden, and yet there would be compensation, for the garden would have its Resurrection. Born in a stranger’s cave, buried in a stranger’s grave, both human birth and death were strangers to His Divinity. Stranger’s grave too, because since sin was foreign to Him, so too was death. Dying for others, He was place in another’s grave. His grave was borrowed for He would give it back on Easter, as he gave back the beast that He rode on Palm Sunday, and the Upper Room which He used for the Last Supper. Burying is only a planting. Paul would later on draw from the fact that he was buried in a garden, the law that if we are planted in the likeness of His death, we shall rise with Him in the glory of His Resurrection.” 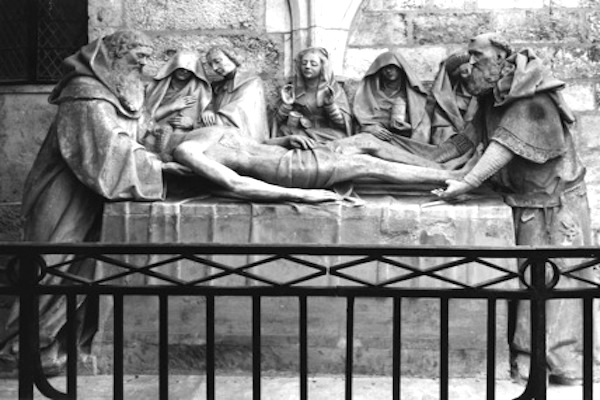