Truths From Past Reflections: Never Forsaken

I saw it several years ago now – and it struck me as so odd, so out-of-place, so sad.

So I took a picture.

And then I forgot about it until the other day, when I happened to see the photo again.

And just as when I saw it the first time, I felt sad as I looked at it and remembered the whole scene…

We were at a lovely park in the city of Ibague, in Colombia. My husband had been invited to teach and preach at a church in the city, and we had decided to take some time one afternoon to walk around the park and enjoy its beauty. Everywhere we looked, we could see trees and bushes and flowers blooming in bright and brilliant colors. We saw a charming-looking pond in the distance, so we crossed a huge field of grass to get to where we could see the lovely flowers and ferns and grasses growing around the water’s edge.

We walked on, and then for awhile we looked back from a distance away. But no mother-bird appeared to shelter and protect the egg, to warm and hatch it, to feed and care for its chick until it was mature enough to be on its own.

It had been left all alone there in the huge field of grass. Rejected. Disowned. Abandoned. Forsaken.

And as I thought of the potential of that egg, all that it could have become were it not for having been cast away and deserted, I felt sad.

And I thought of the many people in the world, just like that egg, who feel rejected and disowned, abandoned and forsaken – who, were it not for them too having been cast away and deserted, would have had the potential to become something special, something great.

But then, I remembered that there is One who has promised to never leave us nor forsake us.

“Be strong and courageous.

for it is the Lord your God who goes with you.

He will not leave you or forsake you.”

That even if everyone else in the world should reject us and abandon us, even our own mothers and fathers, He will never ever do so.

“Though my father and mother forsake me,

the Lord will receive me.”

That, even if one day we should think that He has rejected and abandoned us, we are not the first of His children to have feared so – and that it is impossible for Him to do so, because of where He holds us.

Can a woman forget her nursing child, that she should have no compassion on the son of her womb?

Even these may forget, yet I will not forget you.

Behold, I have engraved you on the palms of my hands…” 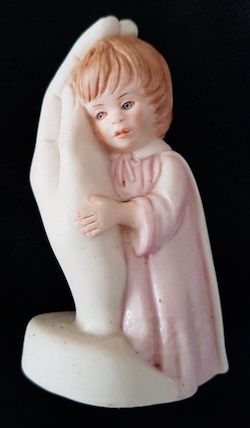 His Son Jesus is the One who said:

“… surely I am with you always, to the very end of the age.”

Yes, that lovely white egg may have been alone and abandoned in that huge field of grass a few years ago. And yes, there may be many people in this world who feel the same as that egg: rejected and forsaken. You, reading this reflection, may even be one of those people.

But we can rest assured, we can stand strong and courageous and fearless in the promise that God in heaven will never leave us nor forsake us – that no matter who in this world rejects us, He will receive us – that He can not possibly forget us because He has us inscribed on the very palms of His hands – that no matter how alone we might feel throughout our lives, He will surely be with us always, to the very end of time.

Word For The Day